The total time allowed for the IELTS Academic Writing test is 60 minutes.

Time yourself and allow just one hour to complete both parts of the test.

Task 2 contributes twice as much as task 1 to the Writing score.

In the actual test you will be given the following instructions:


The table below shows the results of a survey to find out what members of a city sports club think about the club's activities, facilities and opening hours. Summarise the information by selecting and reporting the main features, and make any comparisons where relevant. Write at least 150 words.

The table compares the opinions of male and female club members about the services provided by a city sports club.

We can see from the responses that the male members are generally happy or satisfied with the range of activities at the club, with only 5% dissatisfied. In contrast, however, only about two-thirds of female members were positive about the activity range and almost a third were dissatisfied.

The genders were more in agreement about the club facilities. Only 14% of women and 10% of men were unhappy with these, and the majority (64 and 63% respectively) were very positive.

Finally, the female respondents were much happier with the club opening hours than their male counterparts. Almost three-quarters of them were very satisfied with these and only 3% were unhappy, whereas nearly 40% of the men expressed their dissatisfaction.

Overall, the table indicates that female members are most unhappy with the range of activities, while male members feel that opening hours are the least satisfactory aspect of the club.

The only way to reduce the amount of traffic in cities today is by reducing the need for people to travel from home for work, education or shopping. To what extent do you agree or disagree? Give reasons for your answer and include any relevant examples from your own knowledge or experience.

It is certainly true that today traffic in cities throughout the world has become a major problem. This is obvious from the number of vehicles on our roads and the amount of pollution they cause. The traffic problem might be partly due to individuals travelling for work, study or shopping purposes, which is evident in the rush hours we experience every morning and evening, however, discouraging people from travelling would not be a viable solution.

It is also true that, these days, such daily commuting is not always necessary because people can perform a great majority of their daily activities from home. We can see this in the options Information Technology gives us today. For instance, on-line work, distance learning and shopping facilities are all available via the Internet. In fact, there are more and more apps taking care of your household chores, let alone the domestic robots that help with everything from cooking and cleaning to childcare and companionship.

However, even if everyone had access to the technology and the opportunity to work from home, it is unrealistic to think that everyone would want to. Even though the technology for working, studying or shopping on-line makes this option a possibility, nevertheless it would mean people had less freedom of choice and less social contact in their lives. This would have a large impact on society as a whole.

So, in conclusion, I think that while this practice could reduce the traffic problems in our cities, it is most unlikely to be an acceptable solution. In terms of other solutions, perhaps we need to think more carefully about facilitating public transport and limiting private cars in our city centres. The development of public transport that is not road-based, such as sky trains or subways, would probably be a more acceptable alternative measure to reduce jams on our roads.

The graph below compares figures for the production and consumption of energy in the US from 1950 to 2000. It also predicts figures for 2025.
Summarise the information by selecting and reporting the main features, and make comparisons where relevant. Write at least 150 words. 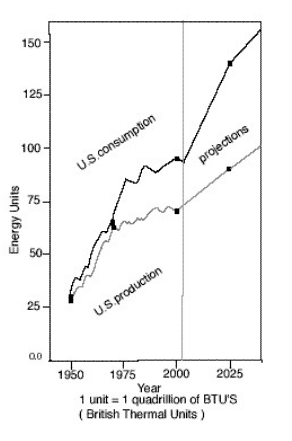 The graph shows changes in the gap between US energy consumption and production since 1950. It also estimates trends up to 2025.

Between 1950 and 1970 both production and consumption increased from just over 30 units to about 65, and although consumption was consistently higher, the difference was marginal during this period.

However, production grew only gradually over the next 30 years to reach 70 units in 2000. In contrast, growth in consumption was steeper and more fluctuating, reaching 95 units by 2000. Energy imports needed to bridge this gap therefore increased from very little in 1970 to a substantial 25 units in 2000.

Overall the graph indicates that energy production in the US is not keeping up with consumption, so imports will continue to increase.

The exploration and development of safe alternatives to fossil fuels should be the most important global priority today.

To what extent do you agree or disagree?
Give reasons for your answer and include any relevant examples from your own knowledge or experience.

It is true to say that fossil fuels are still our main source of energy today, and as more countries develop their industries and their economies, the scale of their use continues to grow. However, we are now well aware of the consequences of relying on this energy source for our natural environment and it is a fact that renewable energy is extremely important for the future of our society.

We’ve been using – rather abusing – fossil fuels as a source of energy since the industrial revolution, and have done considerable damage to the globe. Our carbon footprints will remain in the atmosphere for at least another hundred years. Global warming and the damage to the protective ozone layer are caused by carbon dioxide and other by-products of fossil fuels. So it is obvious that these problems are global rather than national ones. They threaten our whole planet and no action by a single country could solve them. Furthermore these problems are urgent as nobody knows when our natural world will be so damaged that it will no longer be able to support us.

While some countries already use safer alternative energy sources, such as wind, water or solar power, it seems that there has not been sufficient investment in developing the technology to make such alternatives viable for all. So it should definitely be a global priority to invest in such research and development.

Of course there are other global priorities that we also need to address, such as poverty and disease. But while it may be the case that these problems are just as important as the energy problem, there is a sense that time is ticking away for our planet and any solutions to the energy issue will take some time to achieve.

So in conclusion, I would agree that finding alternatives to fossil fuels is certainly the most pressing global priority, if not the most important one for our world today.